Ahh…January- a time for resolutions, fresh starts, and the ever increasing crowd that mobs the gym every afternoon. This is the first of my ‘Monthly Review’ series, in which I set mini goals for myself to accomplish within the month, and hold myself accountable. Since it is already February (already late on entry #1- great start) I will retrospectively review my goals for the previous month. So without further adieu-

By the time I graduated high school, I had spent almost six years studying Spanish, and what did I have to show for it? Nada! I realized that learning another language would be incredibly useful if I wanted to spend a decent amount of time traveling, therefore- maybe I should start with the language I was already somewhat familiar with and try to become fluent, or at least proficient enough to hold a simple conversation. As of now, I work in healthcare, meaning I have to interact with so many different types of people, and when I come across those who are only Spanish-speaking, getting translators and coordinators involved to get a message across is so time-consuming and cumbersome. So my learning to speak Spanish is a win-win from every angle here.

I’m beginning my journey in Spanish with no other than Rosetta Stone (why not?) As a Christmas gift, I received a 12-mo subscription to Rosetta Stone software and I got to choose any language they had available. Some of the options were Swedish, French, Turkish, Japanese and a whole list of others. I chose to do Latin American- based Spanish. The software combines vocabulary, visual recognition of terms, speaking and conversation. Each unit is broken up into thirty lessons, with each one taking about 20-25 minutes to complete. Overall, I love the software, its easy to use, versatile and I can access it from any computer or smartphone! 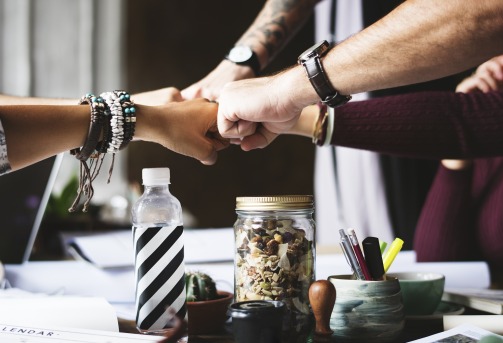 As a young careerist in the healthcare industry- I’ve come to realize that it’s truly not about what you know, it’s about who you know. One major piece of advice that I’ve gotten in the last year and a half since graduation was the need for a strong professional network. And honestly, nobody really tells you how difficult it is to network, until you actually need to do it. Now, for some, networking is as easy as a walk in the park; but for those a touch more introverted (such as myself), working a room at a networking event seems about as possible as doing six backflips in a row.

In an attempt to challenge myself and increase the breadth of my professional circle, I attended a networking night with my graduate university that advertised having health and science organizations in my area in attendance. Seemed promising. I’ve been to about three networking events previously, and there is truly no way to get around the sheer awkwardness of undergrads clad in dress pants and one-size too small platform heels. However, at this particular event, I opted for some comfortable black flats and talked to each representative from the organizations I researched ahead of time. Trust me when I say that not actually thinking about it worked so much more than I originally thought. I only minimally prepared, identified a few contacts I’d like to make, and attempted to talk to each representative like they were just another co-worker. Yeah, there were some awkward moments- but I came out of the night with three new connections, and a lead on a potential new job with a growing specialty practice. Plus, I was able to connect to an organization I absolutely love and want to start volunteering with.

In the last few months, I’ve felt the need to change things up a little bit with my living space. I live with my boyfriend and our dog, in a small two bedroom condo. We have enough space to cram out desks into our second bedroom to create an office space as well as a small dining room with a table for four, if we ever have friends or family visit. Most of the time, my desk collects dust in the corner of the office and the dining room table transforms into a conglomerate of junk mail, sweatshirts and miscellaneous dog toys. Everyone has spaces in their homes where things just seem to collect; the space is essentially unused and eventually you’ll need to spend a Saturday afternoon sifting through the pile of crap you threw there over the last three weeks (No? Just me?). I decided that enough was enough, and I needed to maximize out ‘dead’ space. I dismantled our small dining room table, carefully organized it into our storage closet as if I was playing furniture-Tetris, and rescued my desk from dust collection. I also relocated the six-foot high bookcase, which was a feat in and of itself.

Within ten minutes of rearranging the rooms, I was instantly feeling as though the space was now useful and allowed me to create my very own space within the condo. I even found a few books on the shelf that I should probably get around to reading, ironically one was about tidying up.In the week following, I used my desk almost everyday. Although, it will most likely be annoying to un-Tetris the table if we ever invite company over, I’m satisfied with arranging the space for my own use instead of for the occasional guest. After all, I’m paying for that square footage!

I’m fairly certain that although these small accomplishments are miniscule in the grand scheme of life, I’m still pretty satisfied. I see the difference, and overall, it’s a decent start.

Michelle is a South Jersey native with a passion for writing, traveling and her lab/pit mix, Maya. This blog encompasses her lifestyle insights and adventure memoirs.